We bring you the most comprehensive sourcing seminars and innovative expert panel discussions in the industry. Get the answers you need during our Q & A segments from industry leaders and policy makers.

Are you interested in speaking at an ATS show? A call for speakers is now open! Submit a proposal to let us know what you would like to speak about and we'll see if we can make it happen.

This past Wednesday, Jason Prescott, CEO of JP Communications and producer of ATS-C and ATS-M trade shows, presented to Mexican Apparel & Textile Manufacturers featuring Pro Mexico, CANAIVE and EXINTEX in Mexico City. One goal of the trade shows is not to only increase the number of attendees, but also country participation. This leads to a better global collaborative network of buyers, manufacturers, designers, suppliers and even governments. Then, businesses big and small can create opportunities they  never dreamed of before. To eager participants, he orated the history of the trade shows, goals for the future, and hopes for a more interconnected relationship between Mexico and the Americas, Canada and the U.S markets. 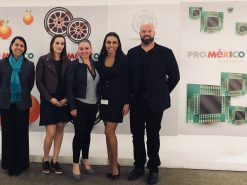 The story all began when Jason Prescott, the TopTenWholesale.com and Manufacturer.com team realized that a country as expansive as Canada, did not have a trade show for apparel. Now, three years later ATSC is the, “largest, biggest and only” textile and apparel sourcing show in the country. Mr. Prescott continued that Toronto has over 700 different cultures inhabiting it and is the second largest business city in North America, making it the optimal place to plant the first ATS trade show.

This year ATSC it is expected to grow by 100%. Through a contract with international organizers, ATSC will expand its product offerings to: general merchandise, electronics, home textiles, novelties, leather and more. In addition, the trade show space has grown from 40,000 to 135,000 square feet of space to accompany the expected 5,000+ attendees.

Miami is the newest trade show to debut from the Apparel Textile Sourcing family. That being said, it is poised to make a big splash on the shores of Miami in May. Miami is in the middle of a renaissance of sorts with growth in all sectors, particularly in apparel. In fact, the Maya Wynwood will host the show right in the thriving fashion and arts district, encompassed by retailers, designers and the like. Word on the street is that the big brands that are regulars at ATSC will be in attendance in Miami. Retailers that have been in attendance include, but are not limited to: Joe Fresh, Adidas, Jockey, Sears, Walmart and Levis.

A driving factor in choosing Miami was not just the aforementioned, but also its proximity to Mexico and The Americas. This would further the core value of having greater country participation in the shows and network as a whole. 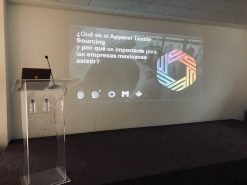 Mexico has begun receiving attention for its investment and advances in technology for high-end apparel production. Also, as speed to market and sourcing has become a priority for brands, Mexico has grown as a manufacturing hub. Jason explained that previously, Mexico has been thought of as just a mass producer items such as jeans and t-shirts.

Although, the perception of their apparel industry is changing, and so is the demand. He further shared that the attendee team responsible for contact with buyers are constantly receiving questions about the attendance of companies from The Americas and Mexico at the shows. Mexican-made products and services are on the rise. So, it is of great opportunity to attend both ATSC and ATSM to use that platform to create new business with the U.S and Canada.

What has been a contributing factor to the success of the ATS brand is that they’re regional. Jason explained they, “work with an ecosystem of providers within the area.” The power has been getting everyone involved from the chambers of commerce and other associations within the area. With the city’s involvement, this not only brings new business but ways to give back. At the end of each show there are charities of choice in which exhibitors can donate their booths which benefit children and families in the host city.

Jason Prescott emphasizes that at the end of the day, “We are not a trade show company, we are a B2B company with a close relationship with major customers, attendees and buyers.” The team is passionate about connecting buyers and sellers, creating business, and giving back. In the end, relationships are at the core of the business and the power of the people are what keeps it going.

Storytelling is my passion in life, whether through words across a page, a styled outfit that speaks volumes, or directing a photoshoot that expresses it visually. I live my life driven by my love of people, art, and the pursuit of happiness. View all posts by Christine Duff

About the Show Register to Attend Apply to Exhibit

Learn More About Us